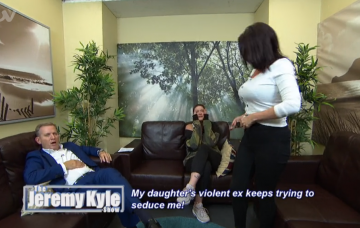 She pulled down her trousers to reveal the inking

Jeremy Kyle was left gobsmacked as a guest pulled down her trousers to reveal a huge tattoo of his face on her thigh.

Caz appeared on Friday’s edition of The Jeremy Kyle Show claiming her daughter’s violent ex-boyfriend keeps trying to seduce her.

But Jezza, 53, got more than he bargained for when Caz revealed she has his face inked on her leg with the words “Jeremy Kyle” written above it.

After Caz explained why she had come on the show, Jeremy asked her: “You’ve got an interesting tattoo, haven’t you? Have we got a picture of it?”

A photo of Caz’s body art then popped up behind them as Jeremy exclaimed: “Ha, I’ve still got it! Who rocks your world?” before posing alongside the picture.

Jeremy told security guard Steve: “Still got it. 53 and still got it. Loving this moment a little bit.”

Later in the show, Caz decided to show Jeremy her tattoo in person while backstage with her daughter Amber.

Jeremy asked Amber: “What do you think of your mother’s tattoo?” to which Caz interrupted: “You just want to see it don’t you?”

She then stood up and pulled down her trousers as Jeremy shouted: “No, no! What are you doing?”

As she revealed the ink, Jeremy was left utterly shocked as he saw his face looking back at him.

Jeremy then wrapped up the segment and kissed Caz’s cheek, telling her: “I’ve never ever been embarrassed in my life but you showing me that…”

One person wrote: “Casually pulling her trousers down on national television showing her Jeremy Kyle tattoo off and she’s trying to prove she didn’t try it on with her daughter’s boyfriend. Not really making herself look the best.”

Casually pulling her trousers down on national television showing her Jeremy Kyle tattoo off and she’s trying to prove she didn’t try it on with her daughter’s boyfriend. Not really making herself look the best 🤦🏻‍♀️🤣 #jeremykyle

BOOM!
Life goal achieved by much! Gets her Jezza tattoo out on telly! #JeremyKyle

Another shocked viewer tweeted: “I can’t believe she has a #JeremyKyle face tattoo on her thigh.”

The Jeremy Kyle Show airs ever weekday morning, 9:25, on ITV.

What did you think of Caz’s tattoo? Leave us a comment on our Facebook page @EntertainmentDailyFix and let us know what you think!