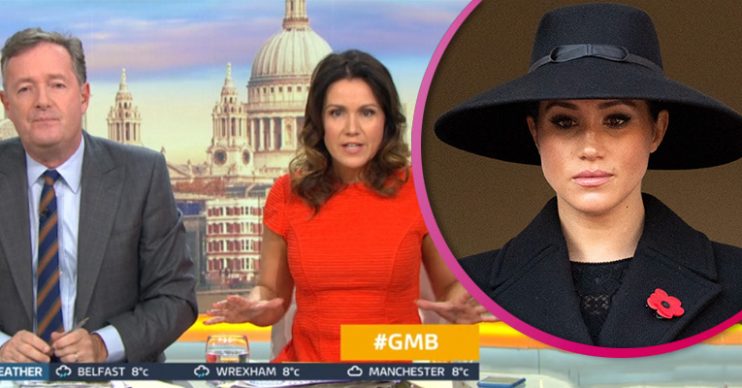 He told the Duchess to "stop the whining"

Susanna Reid hit back as Piers Morgan accused the Duchess of Sussex of “playing the victim card”.

During Tuesday’s Good Morning Britain, Piers launched into a rant and claimed being a royal is “the easiest thing in the world”.

Discussing Hillary Clinton saying she wanted to “hug” Meghan over the criticism against her, Piers asked: “Can somebody explain to me what is it that Meghan Markle is going through? What is this terrible ordeal?”

Do you think you ranting helps Meghan and having a stiff upper lip and manning up is helping?

Piers replied: “I saw the documentary where they went to South Africa and met some of the most impoverished people on Earth and then made it all about their own terrible problems in life.”

Susanna hit back: “You can acknowledge that other people are experiencing hardships and also feel like you’re going through something.”

Piers interrupted: “What is she going through? She’s living in a vast palatial home at the tax payer’s expense. I just don’t get it.”

Susanna explained: “She thinks she’s being treated unfairly, she said that in the interview [during the doc]. She’s having a tough time.”

Piers said: “You’re married to a handsome prince, living in a palace with servants.”

Susanna cut in: “Piers, you know how things can be more challenging under the surface than they appear on the surface.”

Her co-star replied: “What we need in this country…” before Susanna interrupted: “We need a bit of manning up and resilience and less snowflakery.”

Piers continued: “That’s exactly what we need. We need less privileged wealthy people banging on all day long about how awful their lives are. I don’t want to hear it any more.”

Susanna asked: “Do you think you ranting helps Meghan and having a stiff upper lip and manning up is helping?”

Piers said: “She worked out the way to get over the rush of bad press she was getting, totally deserved in my opinion, and now [Meghan and Harry are] playing this massive victim card and no-one is allowed to criticise them any more.”

Susanna interrupted: “No sorry, you have a horrible way of describing. Playing the victim card is a really unpleasant way to describe.”

Piers cut in: “Playing the victim card is the curse of the modern age. The stiff upper lip that Meghan scorns is a good thing.”