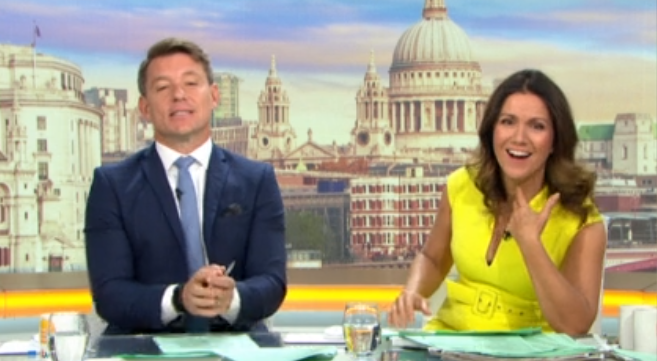 He was also once in the TV show Friends

Ben Shephard has shocked his Good Morning Britain co-star Susanna Reid by revealing he was once in a Harry Potter movie.

On Thursday’s show, the presenter spoke about his role in the franchise as Andi Peters introduced a competition segment from the Warner Brother studios.

Andi told viewers: “You of all people should know where I am, Ben – you have dressed up and been here!”

A photo then popped up of Ben in character as a wizard.

“Here is living proof of Ben in costume when he was here,” Andi said.

“Ben was in the movie Half-Blood Prince – one of the Harry Potter movies – and that’s exactly where I am right now.”

As the show returned to the studios, Susanna was left gobsmacked and asked Ben: “I’m sorry, that is the first time I have known that you are in a Harry Potter film?!”

Susanna asked: “As well as in Friends?” to which Ben said: “Yes, I have appeared in many background artist shots.”

Ben then added: “Everyone who has appeared in the film or has a credit has a wand in the wand room, see if you can find it.”

The star was cast as Diagon Alley Father in Harry Potter and the Half-Blood Prince in 2009.

He bagged the part after impressing producers while filming a Behind the Scenes feature for the franchise.

Ben also had a cameo in the hit TV show Friends back in 2002.

He played a reporter in the programme, who tried to talk to Joey as he attended a film premiere.

Ben revealed he made the credit as ‘Man With Microphone’.

Speaking about his role last year, Ben said on the daytime show: “I actually leant out and you can see that Matt Le Blanc puts his hand out as if to say, ‘Who is this freak? Get him away from me.’

“It’s been downhill since then.”