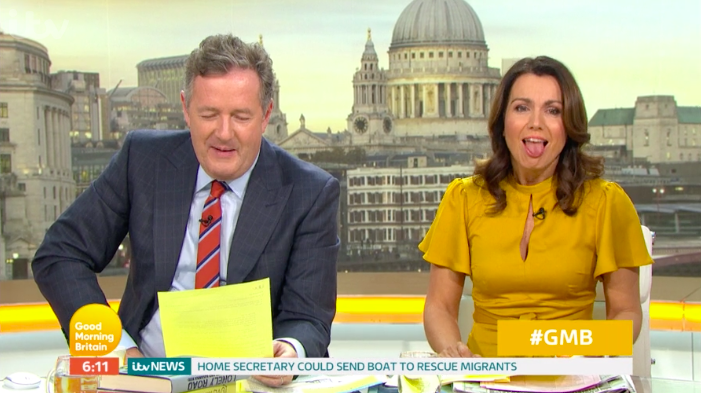 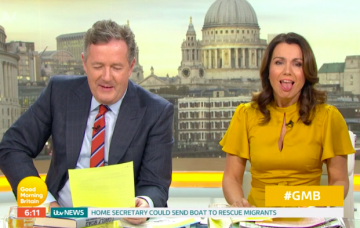 He described them holding hands under the desk

Piers Morgan and Susanna Reid have long had a love-hate on-screen relationship.

But on Wednesday’s Good Morning Britain all kinds of lines were crossed as they described kissing and holding hands.

It was part of a racy segment on fan-fiction after Susanna admitted she Googled “Piers Morgan and Susanna Reid fan fiction” during a taxi journey.

Just minutes into the show, Susanna admitted she’d been chatting to a friend on Tuesday night about E.L. James, who has wrote sexy fan-fiction.

The 47-year-old explained: “This opened a whole new world to me yesterday. Apparently, if you’re a fan of characters in films or books, people go online and write fantasy stories about them. And I said to my friend, ‘Does that happen to anybody you’re a fan of? And she said, ‘Yes, it probably happens with you and Piers.’

“So of course in the cab on the way home, I Googled Piers Morgan and Susanna Reid fan fiction.”

“And what did we find, Susanna?” Piers asked, amused.

The pair described a few different stories about them, including one called “The Lonely Road” where Piers has “a secret”.

Susanna interrupted, saying: “Let’s get to the one called Love and Hate.”

Charlotte Hawkins added: “Yeah, that’s the juicy one! You’ve got to read it in the right way.”

In a deep voice, the mum-of-two described: “I feel Piers whispering slowly in my ear.” Real-life Piers leaned in to recreate the line as she moved away, shrieking: “Nooo, it’s fiction!”

He continued reading: “Whilst on air, Susanna felt Piers wrap his fingers round hers under the desk.

“They glanced at each, both blushing slightly. Well, so much for secrecy, right?”

He continued reading: “Susanna calls Piers, ‘Snugglebear’, and tells him: ‘You look so handsome, cutie pie’.”

Real-life Susanna shrieked again: “It’s fiction,” as she gagged and pretended to be sick.

He continued reading: “‘You’re mine, Reid’, I kiss her lips. ‘Susanna, we could have thousands of little Piers running around’. ‘See you tomorrow darling,’ she says as she leans her chest against his and says, ‘Bye baby.’

Charlotte and Richard Arnold couldn’t stop laughing as a nauseous-looking Susanna tried to continue with the show.

Do you think Piers and Susanna have good chemistry? Leave us a comment on our Facebook page @EntertainmentDailyFix and let us know what you think.