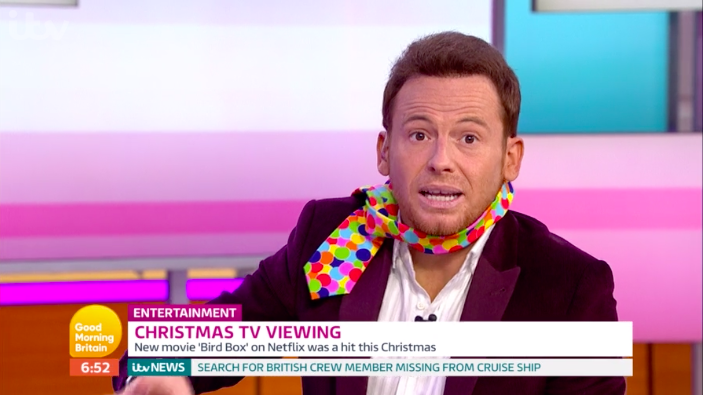 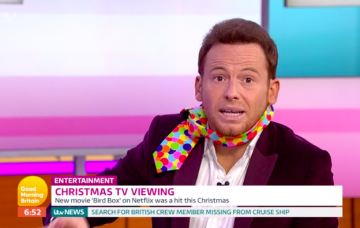 He did not pronounce Sandra Bullock's name right...

Joe Swash is known for his cheeky sense of humour, but things tipped over into the risqué on Thursday morning’s episode of Good Morning Britain.

The actor-turned-presenter appeared on the ITV show, where he accidentally swore as he very rudely mispronounced Sandra Bullock’s name…

Viewers were delighted to see the I’m A Celebrity… Get Me Out of Here! spin-off host, who was on GMB to co-present alongside Charlotte Hawkins and Ranvir Singh.

Even though he was late.

Joe, 36, appeared through the set doors minutes after the show began, shouting: “Sorry! I got stuck, the traffic was murder!”

He then swiftly dived into the show, talking about his lovely Christmas with girlfriend, Stacey Solomon.

“It’s a movie about the end of the world,” he explained. “Starring Sandra Bullock.” Except, instead of a u, he pronounced it with an o…

Everyone on set burst out laughing as Joe said, “What?”

Joe looked perplexed, asking: “Is that not what I said?”

Viewers were amused, with one tweeting: “Joe swash old Sandra [bleep] hahaha what a legend 😂 @StaceySolomon.”

A third laughed: “Joe Swash show is his presenting skills describing #BirdBox⁠. I hope they pay him in nuts. #gmb.” While a fourth asked: “Did he say Sandra [bleep]? #gmb.”

Joe and Stacey, 29, enjoyed their first Christmas together in their new home, and shared some lovely pictures on Instagram.

The former I’m A Celeb star posted a picture with her two sons on Instagram, writing: “Our first ever Christmas on OUR HOUSE 😬😬⬅️ This was my face the entire day! I love you to the moon and back @realjoeswashy 💛.”

She also admitted it was a “crazy” day, as they hosted all their family.

Stacey, who shot to fame on X Factor, added: “It was like real life ‘Meet The Parents’ 😂 Luckily no one got hurt and everyone is still talking no matter how heated Family Fortunes got 😂 Feeling extremely privileged this morning to have been able to share a special day with my family and my extended family I adore each and every one of them. I hope you all had a wonderful Christmas.”

We love you, Joe – rude blunders and all. If you’re listening, GMB producers? Please make him a regular?

Did you think this blunder was funny? Leave us a comment on our Facebook page @EntertainmentDailyFix and let us know what you think.