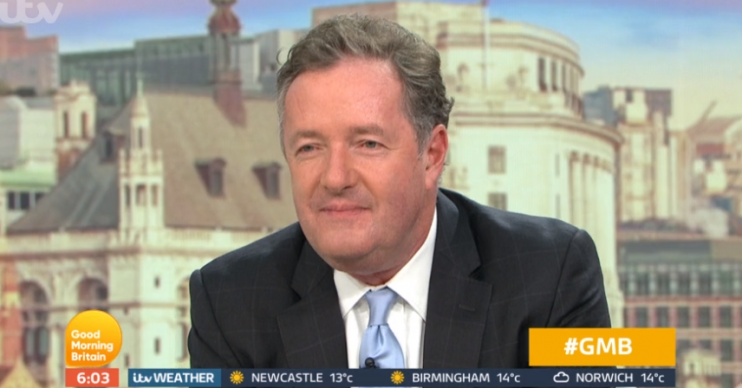 He forgot to shave!

After calls for him to be sacked from Good Morning Britain, Piers Morgan has revealed he’s taking two weeks off.

The presenter, who almost missed the start of Wednesday morning’s show because he had forgotten to shave, is spending the next couple of weeks in Beverly Hills as he enjoys a break from the programme.

He continued: “And when I’m not on air for the next two weeks, just bear in mind that when the sack Piers Morgan brigade go, ‘we got him!’ I’ll be back in two weeks.”

At the start of the show, Piers rocked up late after having to quickly shave.

Referring to the ongoing petition to get Piers fired from the show, Susanna Reid joked: “For a moment there, I thought the petition had succeeded.”

Piers said: “I was literally in my dressing room 10 minutes ago, I was a bit tired this morning and I suddenly looked in the mirror as I was doing my tie and I went, ‘I haven’t shaved.’

“I had forgotten. I get up every morning, shower and shave. How could I forget to shave? And then I thought, ‘can I get away with it?’, but no there was a slight stubble.

“There’d be someone out there like, ‘oh, look at him the slovenly old vagrant.'”

He added: “We had an emergency, but someone had an electric razor, which I haven’t used for about 30 years.

“Then I heard the ‘two minutes to go’ and I hadn’t even got into makeup.”

Susanna added: “I thought we were going to start the programme without you sitting there and people would think the petition had succeeded, remove Piers Morgan from Good Morning Britain but actually there are more signatures on the ‘save Piers Morgan’.”

Piers said: “I had a moment yesterday when the number one and two trends on Twitter were ‘fire Piers’ and ‘save Piers’. They were trending here and America.

I get up every morning, shower and shave. How could I forget to shave?

“The people who started this were like, ‘got you now!’ but I was like do you have any comprehension of how good I’m feeling right now?”

Susanna told viewers: “I’d just like to point out, if you hate Piers Morgan, the idea is not to make him trend all over the world because he has an ego the size of the London Eye.

“The way to affect Piers Morgan [is to] ignore him.”

But Piers pointed out that another petition to keep him on the show has received almost 50,000 signatures.

The show’s Twitter page also set up a poll asking viewers whether they wanted to see Piers go or stay.

‘I don’t think they’ve thought this through…You’ve helped me get a pay rise.’ @piersmorgan responds to calls for him to be fired following an online petition. #FirePiers | #SavePiers pic.twitter.com/4fenwXUU1f

“Let me tell you what you have done, you’ve helped me get a pay rise, so cheers,” as he laughed.

Piers ranted that it was “ridiculous” and that if that’s the case, he can identify as a penguin.

Do you think Piers should be fired from GMB? Or should he stay? Leave us a comment on our Facebook page @EntertainmentDailyFix and let us know what you think!