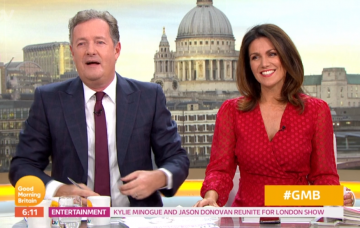 Piers Morgan took a trip down memory lane as he reminisced about his school days on Monday’s Good Morning Britain.

The show paid a visit to the presenter’s former primary school, as it launched its healthy initiative The Daily Mile – which tries to encourage children to run a mile every single morning.

During the segment, Piers revealed his teachers were concerned because he would go to school “smelling of beer” as his parents ran a local pub.

Piers’ co-star Laura Tobin reported live from outside Fletching Primary School in East Sussex, where she treated viewers to a couple of childhood pics of Piers.

The first saw Piers as a young boy with long hair and wearing a striped top.

The second sees the star as a toddler sitting on a barrel as he smiled for the camera.

Explaining why she was visiting Piers’ former school, Laura explained: “We are here because the Daily Mile is back. We are back at school.

“It’s the challenge where we get children to run a mile every single morning.

“It may be difficult at first but it slowly improves their health and their wellbeing, positivity and concentration. It hopefully will tackle the rising obesity crisis in our school primaries.”

Discussing his school days, Piers said how living above a pub had caused some concern amongst his school teachers because he would walk in “smelling of beer”.

He told his co-stars: “The only embarrassing thing I remember about that school was, my parents ran the local pub, the Griffin Inn. And you could walk to school from the Griffin Inn, right in the middle of the village.

“One day there was a note sent to my mother, apparently I was smelling of beer and ‘what was the problem?’ and I was about six.

“My mother had to respond to the charge that her son stank of beer aged six. The truth was, to earn extra pocket money, I used to get up early before school and I used to do the bottling up.”

He continued: “It was character building, I would do a good hour’s shift bottling up before school. Nowadays, try telling kids these days to do that, honestly.

“The downside was I went to school smelling of beer, intoxicating a bunch of five year olds, which wasn’t good.”

Laura admitted she was struggling to “dig out some dirt” on Piers.

She said: “We have been trying to dig out some dirt on you and it is literally like the world’s best kept secret.

“Other than the fact that we know you used to come to school smelling of beer, we can’t find anything out. But I am trying.”

The star then revealed Piers’ former primary school has renamed the Daily Mile the ‘Morgan Mile’ for one day only.

What is your funniest school memory? Leave us a comment on our Facebook page @EntertainmentDailyFix and let us know what you think!