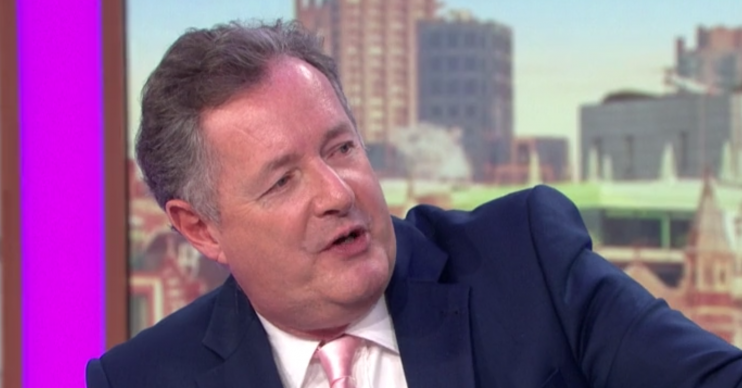 Made it clear star's choice of words were not acceptable

The booming star of stage and cinema, 83, let rip by hollering “arse” three times in quick succession before 9am – much to the amusement of those in the studio.

But even though Piers tittered along with show co-host Susanna Reid at Brian’s language, he quickly made it clear the iconic actor’s choice of words had not been acceptable.

Referring to his views about his preference for women over men, Brian – who was accompanied on the ITV daytime TV show by daughter Rosalind – playfully pondered whether he could get away with his turn of phrase… before going on to repeat it twice!

“My heroes – my heroines – are women,” he explained.

“All my life, 90% of men have bored the arse off me. And it is women who have taught me everything.”

As a couple of nervous looks were exchanged, Brian pressed on regardless.

“Can I say arse?” he enquired with a twinkle in his eye.

He then added: “A lot of men bore the arse of me.”

A tickled Piers managed to get out, not entirely convincingly: “I’d like to apologise to anyone offended by that.”

Joking about his support for Rosalind’s theatrical productions in his role as executive producer, Brian earlier blustered: “I’m just supplying the money really, I’m being a sugar daddy, I’m being fleeced and abused.”

But despite his hilarious blunder, the vast majority of viewers commenting on Twitter about his appearance were delighted to see – and hear – Brian.

Several social media users even called on him to be booked as a regular guest.

“Brian blessed on GMB has made my morning, a joy to see you with beautiful Susanna,” tweeted one fan.

Another viewer requested: “Please can we have more Brian Blessed that was not enough.”

A third, very enthusiastic, supporter begged: “PLEASE! PLEASE!! PLEASE!!! Have Brian Blessed on every day! That was BRILLIANT but so short! Imagine waking up to that every day… one’s brain will be ever alert and nourished!”

And comedian Ricky Gervais, commenting on a short clip of Brian bellowing “the world’s gone nuts!” posted by Piers, laughed on Twitter: “Haha. He’s like a mythical creature.”

A message to the planet from my spirit animal Brian Blessed.