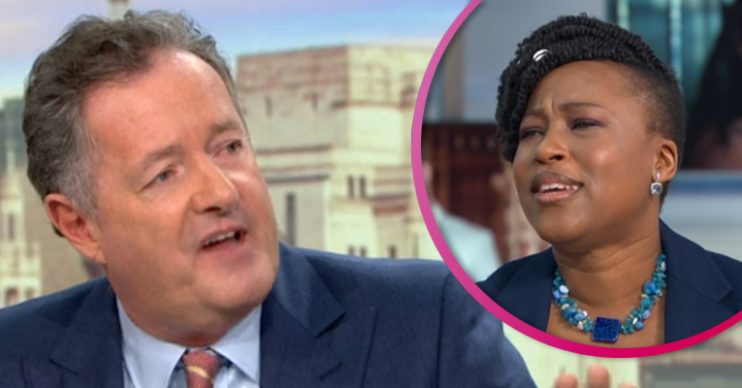 She accused Piers of refusing to "get educated"

TV’s Piers Morgan got into a shouting match with a Good Morning Britain guest today over the Duchess of Sussex.

On Tuesday’s show, the presenter clashed with Dr Shola Mos-Shogbamimu over whether the British media has treated Meghan unfairly since she married into the royal family.

The public speaker accused Piers of using his platform to “spout out this personal vendetta with nasty and vile comments”.

Piers began: “You’re going to say it’s [media coverage] racist isn’t it? Where is this racism that you keep talking about?

“Where are the ghastly tabloids that you say have been driving this racist agenda against a woman who was lorded and welcomed her [as] a breath of fresh air?”

You are using your platform so irresponsibly to spout out this personal vendetta with nasty and vile comments.

Shola said: “If you’d paid attention to the interviews I’ve done then you would have had the answer. That is an incredibly obtuse question to keep asking.”

Piers cut in: “No actually it’s a very important question. Where is the racism?”

Shola continued: “I’m going to stop the conversation on Meghan being the problem or saying that she’s done something. Let me tell you what’s so offensive about this Piers, especially with you.

“You are a man, privileged to have power and influence and you are using your platform so irresponsibly to spout out this personal vendetta with nasty and vile comments knowing fully well that your words are containing bigotry, misogyny, sexism and racism.

“You don’t take responsibility for how you have contributed to the so-called royal crisis,” as Piers tried to cut in and argue his point.

“So when you ask me where is racism, it is not my job teach you about racism,” Shola shouted.

Piers hit back: “But it is your job to…” as Shola interrupted: “Don’t tell me what my job is.”

Piers continued: “I’ll tell you what your job is on this programme. You like to say this is all driven by racism but when you’re actually pinned down…”

‘Prince Harry is not capable of bullying The Queen.’

As The Queen agrees to let Prince Harry and Meghan step back from royal duties, there are some heated disagreements as to how they handled the situation.

Shola hit back: “I have given examples if you had paid attention. If you can’t see it because of your privilege… stop asking me! People have been telling you.”

Piers shouted: “You can’t say I can’t see it when it doesn’t exist!” to which Shola said: “Of course it exists!”

Shola added: “It is not my job to educate you Piers Morgan but you refuse to get educated.”

As the other guests tried to interrupt and ask to “move on”, Piers said: “I’ll decide where we go with this interview.”