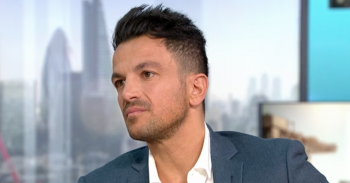 Singer wouldn't speak about his ex-wife

Peter Andre avoided questions about his ex-wife Katie Price this morning as he appeared on Good Morning Britain alongside hosts Piers Morgan and Susanna Reid.

The singer, who shares children Junior, 13, and Princess, 11, with the model, was shown a clip of Katie appearing on the breakfast TV show last month.

In it, she labelled Peter, 46, a hypocrite for not letting the kids appear on her reality TV show, My Crazy Life.

She added: “I just want to put it out there that he’s really selfish and the kids miss out on it.”

After the clip aired, Piers asked the singer for his take on the situation, with Peter telling the outspoken host: “Piers, you should know by now that I don’t talk about these things publicly. I never have. Why would I do that?”

Susanna attempted to diffuse the tense situation by telling Peter they felt they should offer him a right of reply, to which the star stated: “It’s a legal issue so should never be talked about.”

Peter shut down any further questions about the former glamour model by grinning awkwardly before turning the tables on his interviewees and asking: “But it doesn’t matter, how are you? I should be a politician.”

It had all started so well for Piers and Peter, who began the segment by reminiscing about the last time the singer was on the show, when he and Piers shared a kiss.

But all’s well that ends well and the twosome did indeed kiss and make up before the show’s credits rolled, with Peter inviting Piers to his show at London’s O2 Arena this evening.

Read more: Katie Price has another run in with the police

Katie and Peter announced their separation in May 2009, after almost four years of marriage.

Peter is now married to junior doctor Emily, with whom he shares kids Amelia, five, and Theo, two, while Katie is back with her boyfriend Kris Boyson.

Do you think Peter was right not to talk about Katie? Leave us a comment on our Facebook page @EntertainmentDailyFix and let us know what you think”