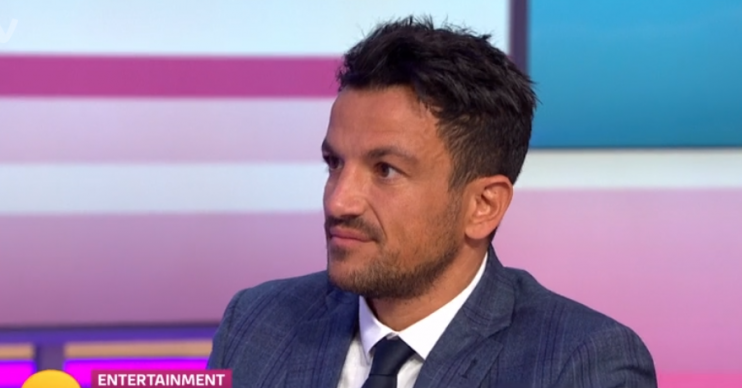 The singer, who shares two children with Katie, has been filling in for the show’s showbiz correspondent Richard Arnold this week to provide all the latest entertainment news.

On Thursday’s show, Peter discussed the drama going on in the Love Island villa and contestant Amy Hart’s departure.

Host Ben Shephard asked Peter whether he thinks Amy was “too naive” going on the show expecting to find love.

Peter replied: “You’re probably right but when I did I’m A Celebrity I’d never seen it before.

“I was living overseas and I’d never seen it, I just thought it was a bit of a survivor programme.”

During his stint on I’m A Celebrity in 2004, Peter found love with Katie.

Ben then cheekily said: “It was a little bit like Love Island in many ways, it was for you wasn’t it Pete?”

Peter replied: “It was yeah, but anyway, in other news…”

As the panel laughed, Ben said: “You brought that up by the way!” while his co-star Susanna Reid added: “Let’s dip out of that one!”

Katie and Peter found love in the jungle and went on to marry in 2005.

Peter went on to marry his second wife Emily MacDonagh and they have two children – daughter Amelia, five, and son Theo, two.

Earlier this year, Katie branded Peter a “hypocrite” during an appearance on GMB.

In March, the former glamour model ranted: “I’m actually really cheesed off with Pete at the moment because when people are watching my show they’re going to think where’s Junior and Princess?

He shut down host Piers Morgan by saying: “Piers, you should know by now that I don’t talk about these things publicly. I never have. Why would I do that? It’s a legal issue so should never be talked about.”

However, in May, the former couple appeared to call it truce after Katie apologised to Peter on Twitter.

She wrote: “I had a tough year last year! A person stirred trouble with me and Pete which he reacted to protect our children! Yes I said things but I was upset and didn’t mean harm! Me and Pete love each other really lol !I’m sorry @MrPeterAndre if I hurt you! (sic)”

Peter replied: “Do you know what, I really appreciate you saying that. Thank you.”