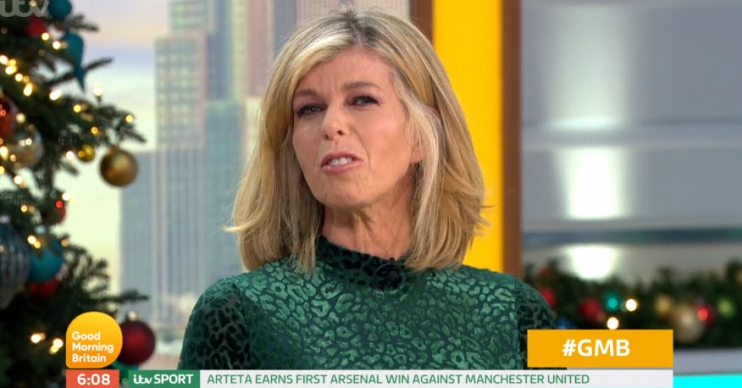 Myles previously admitted he has a crush on Kate

Kate Garraway has joked she needs a “restraining order” after ‘flirting’ with her I’m A Celebrity co-star Myles Stephenson.

The singer appeared on Thursday’s Good Morning Britain as he filled in for showbiz editor Richard Arnold on the programme.

Kate, 52, said she follows Myles “on Instagram and in real life” and joked “the restraining order is coming”.

At the start of the show, Kate did a little dance as she and Ben Shephard wished viewers a happy new year.

Referring to her dance, Ben quipped: “That’s because Myles is sitting beside you.”

It’s the eyes, you just get drawn into these balls.

He asked: “Is this the first time there has been a reunion on screen?”

Kate gushed: “It’s the eyes, you just get drawn into these balls,” as Ben joked: “It is the eyes, I’ve fallen in love with the eyes!”

Speaking about Myles’ New Year’s Eve celebrations, Kate admitted: “If you follow Myles on Instagram, which I do very closely and in real life – the restraining order is coming in 2020 don’t worry – it looked like a very glamorous party,” as he laughed.

Last month, Myles admitted having a crush on Kate when they camped together in the I’m A Celebrity jungle.

Myles told his campmates: “I’ve slept with someone older than Kate Garraway,” as he gestured to Kate, adding: “You are the same age as my mum.”

Kate said: “That’s good to know because I think when you approach 50 it feels like you are no longer attractive. It’s a massive number and it feels like a big thing.”

Meanwhile, during the Coming Out show after the series had finished, Myles was scolded by his mum over his sexual encounters with older women.

But he insisted: “Kate Garraway is really hot.”

Last month, after Myles made his revelation to Kate, her children joked they would rather have him as their dad instead of her husband, Derek Draper.

During an appearance on GMB, Derek asked Darcey and Billy: “What did you think about what Myles was saying about mum?”

Derek then asked: “Who would you rather have as your dad? Me or Myles?”

Without hesitation, both kids said Myles as Darcey added: “Hands down!”