The reformed ex-prisoner, who fought off a knife-wielding terrorist who was wearing a suicide belt on London Bridge, was on the show giving his first live interview.

John fought off the attacker using the force of foam from a fire extinguisher inside Fishmongers' Hall.

Tragically, Cambridge graduates Saskia Jones and Jack Merritt, who John was close with, were killed in the attack. 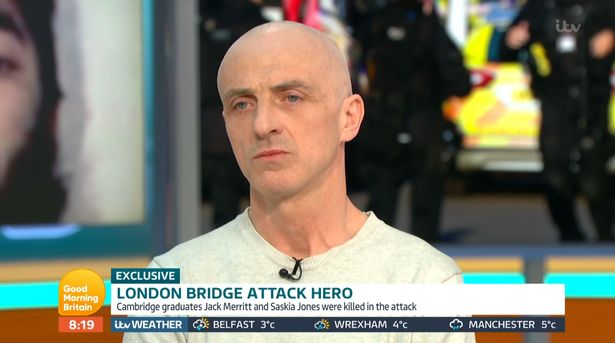 After admitting he felt haunted by the ordeal, Kate immediately asked "why?" and John replied: "Just cause people lost lives and they shouldn’t have."

The exchange prompted viewers to express their anger over the insensitive line of questioning.

Taking to Twitter, one viewer said: "Why does it haunt you? What a [bleeping] question."

"When he said it still haunts him Kate is asking why? Jesus," added another.

A third said: "This bloke might feel more able to answer questions if they were put to him as more of a conversation not an interrogation."

When he said it still haunts him Kate is asking why ? Jesus #Gmb

Not the best interview, however very brave for his actions!!

"Does it still haunt you?"

Describing the incident, John said: "It all happened so quickly. We were out on the balcony above the staircase having a chat and suddenly loads of noise started and screaming.

"Initially it wasn’t clear if it was messing about. Within seconds it got more intense and there was no doubting something was afoot downstairs."

Within seconds it got more intense and there was no doubting something was afoot downstairs.

John appeared on the show with his case worker Jan Cunliffe, who added: "One he is a hero. He went through 13 years of prison and got through that and got a law degree and helped other prisoners but for this to happen as well and to go out there and try to save other people’s lives.

"John was convicted of murder, so people thought he was a murderer but in fact, he’s not he’s a life saver. He saved lives that day."