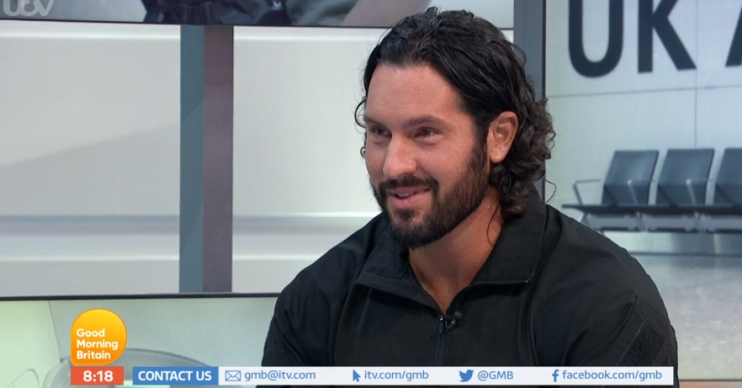 Marshall Mirachi appeared on the show with his dog Hurricane

Viewers of Good Morning Britain were left hot under the collar by a “hunky” dog owner on today’s show.

Former Secret Service officer Marshall Mirarchi, from Washington, appeared on Friday’s show to talk about his dog Hurricane, who received the Order of Merit from PDSA – known as an animal’s OBE – after he stopped a White House intruder back in 2014.

Despite the intruder punching and kicking him, Hurricane dragged the man to the ground until Secret Service agents could arrest the man.

Hurricane, who has now retired, has become the first ever non-British animal to receive the Order of Merit award.

Handler Marshall has now adopted Hurricane and is his owner.

Speaking about Hurricane’s award, Marshall said: “It’s been amazing. The PDSA is just extraordinary, this is the pinnacle of his career.

“To me there is no higher honour, so he got all the recognition in the United States and now to receive an international award like this, it’s just amazing.”

Marshall revealed he decided to retire after Hurricane as he felt “guilty” going back to work without his furry pal.

He said: “I tried to have another dog, we did it for a year and Hurricane did not like that at all.

“The guilt started to weigh on me. I felt like I was cheating on him almost.”

Marshall gushed: “He’s my best friend. That dog is my whole world. All these years working together, he knows what I’m thinking and I know what he’s thinking.

“People may not believe it but anyone who is a true dog lover will know, your dog knows everything that is going on.”

Viewers were left gushing over Marshall and shared their thoughts on Twitter.

One person said: “You’re welcome back Marshall. Anytime,” while another wrote: “Wow sod the dog just look at the handler,” followed by heart eye emojis.

Wow sod the dog just look at the handler 😍😍😍 #GMB

A third tweeted: “He’s gorgeous. The dog isn’t bad either.”

A fourth added: “Jesus never mind the doggo his handler is a bit of a hunk (sic).”