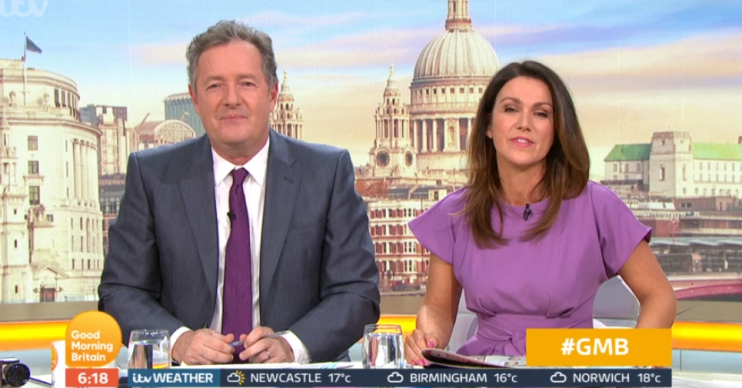 They will be replaced next week

Piers Morgan and Susanna Reid have revealed they are taking another break from Good Morning Britain next week.

The presenters will enjoy a one-week break for half-term just over a month after they took two weeks off for Easter.

But it wasn’t long before viewers took to Twitter to voice their sadness and speculate who will fill in for the pair.

Many are convinced Richard Madeley will take Piers‘ spot on the show.

One person wrote: “I’m afraid I won’t be watching GMB next week, I never do when Susanna and rest of the main presenters are off for half term, even though I like GMB a lot. I just don’t. GMB is my fav morning TV program. (sic)”

Another said: “@piersmorgan please please tell me that the prize [bleep] Madeley wont be stepping in for you! If he is I will be BBC breakfast next week!”

A third added: “Piers is off next week, who have we got instead then, not that [bleep] idiot Madeley,” followed by sad face emojis.

Meanwhile, on today’s show, Susanna was left red-faced when Piers suggested that she had been “up all night” with a companion.

He asked her: “You’re very perky, and I don’t quite know why. Something’s happened.”

Susanna replied: “I’m very happy!” to which Piers said: “That’s the happy face you give me when you’ve had no sleep.”

The producers then played Barry White, which sent the panel into hysterics.

Piers joked: “I don’t doubt that at all! I don’t think the fact you spent hours in bed is up for question…it’s what you were doing there!”