Sir David Attenborough gave BBC Breakfast host Naga Munchetty short shrift when she quizzed him about the Queen in an awkward TV interview.

The 92-year-old presenter and naturalist was on the show to urge people to take part in the world’s biggest butterfly count.

The interview began smoothly when Naga, 43, asked the Blue Planet II star about the campaign.

"What we’re asking is that people should just put other things aside and, for 15 minutes, sit in a sunny place, maybe in a little garden, somewhere quiet, and just see what butterflies come down," Sir David said.

After discussing Blue Planet II, Sir David was put on the spot over his recent conversation with the Queen.

"You recently had a discussion with the Queen and we’re very keen to know if perhaps you discussed plastics with her when you met her?" Naga asked.

Watch now to hear the legend that is Sir #DavidAttenborough talking about the #bigbutterflycount pic.twitter.com/btSNSKGhMQ 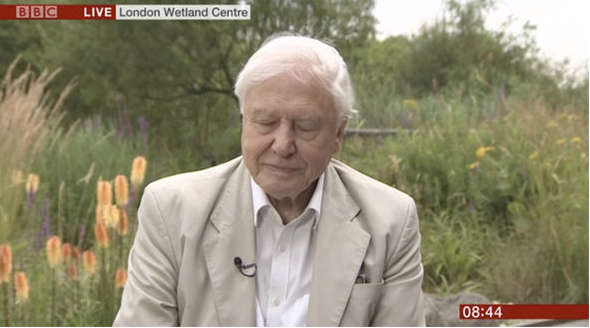 I wanted to talk about the Big Butterfly Count, that’s why you invited me here.

"No, we did not," the much-loved broadcaster replied.

Naga went on: “Prince Charles, her son, has been a great of advocate of helping the environment. It’s an issue that does seem to be held closely to the royal family’s heart."

"That’s as maybe, yes," Sir David would only say.

Naga told him: "I understand your reluctance to talk about that conversation but perhaps you’d be keen to talk about RRS Sir David Attenborough?” – referring to the ship Sir David recently launched.

"I wanted to talk about the Big Butterfly Count, that’s why you invited me here," he replied.

"Of course we will do and will continue to, but we can’t resist the opportunity to talk to you about more because you’re so fondly held in so many people’s hearts and an example of that was RSS Sir David Attenborough.

"Was that a significant moment for you?" Munchetty asked.

That was a very awkward interview the @BBCBreakfast did with Sir David Attenborough. #awkward #bbcbreakfast

"And how did you feel when you saw it launch?"

"It was a very moving occasion," he said.

Naga returned to the subject of butterflies, asking, "Do you have a favourite butterfly?" and then: "Why are butterflies so colourful?"

"We all know what butterflies are and they have different colours because butterflies have eyes and they can recognise prospective mates."

What's been your David Attenborough career highlight? Leave us a comment on our Facebook page @EntertainmentDailyFix and let us know what you think!