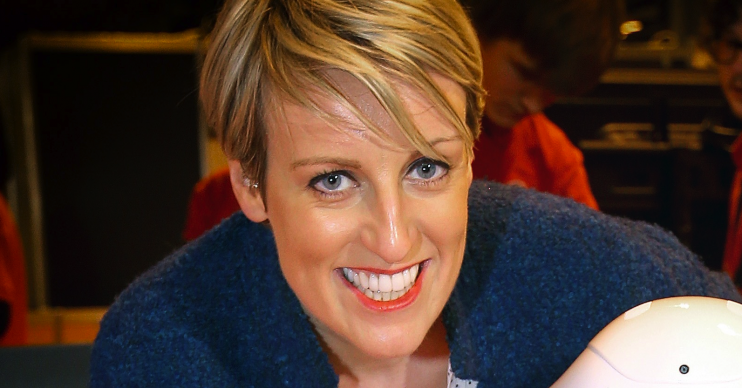 She was due on air in less than an hour...

BBC Breakfast presenter Steph McGovern caused a stir on Twitter yesterday as she shared a health worry with her fans.

The business expert, who’s pregnant with her first child, revealed that a large red lump had appeared on her forehead.

And with just half an hour to go until she was due to start filming the morning show, the 37-year-old frantically asked her followers for help.

The bump (forehead, not🤰🏼 one) is now covered in makeup for telly purposes. Still haven’t worked out what it is…… not itchy+doesn’t hurt. I like the theory it’s a unicorn horn. Not loving idea it’s possibly a spider bite. Sleep walking+nutting a wall is another suggestion 🤪 pic.twitter.com/OkLbmIM6Ge

The Middlesbrough-born presenter originally tweeted her 366,000 fans for some advice.

She wrote: “So here’s the thing. I’ve woken up with a big red lump on my forehead. I’ve no idea where it came from or what it is.

“Any suggestions? It’s red, but not itchy. Bite? Allergy? Brain giving up on me and leaving my body?

“I start filming in 30mins so am gonna look a right muppet.”

Her followers were quick to jump to her assistance – although some of the comments were said more in jest than anything else.

One fan quipped: “Maybe a spider’s laid eggs in your head.”

Another offered: “Looks like a bite? Or your other half bashed you over the head in your sleep.”

A third joked: “Steph, are you sure you’re not growing your baby on your forehead lol.”

And a fourth fan even suggested that the presenter was turning into a unicorn.

Shortly after, Steph shared a picture of the offending bump, adding that: “Sleep walking + nutting a wall is another suggestion.”

Speaking of bumps, Steph announced in July that she’s expecting a child with her TV executive girlfriend.

She shared the news on Twitter, writing: “I see my news is out! Yep, I am no longer with pot belly… I am now with child. #babyonboard.”

Steph hasn’t given a further update on her head lump, other than agreeing with fans that the unicorn theory was correct…

The unicorn theory was right……🦄 pic.twitter.com/QRrDDkvPCi