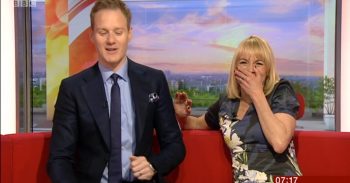 She had to walk off set!

Louise Minchin was left with her head in her hands after her phone went off on live television.

The BBC Breakfast presenter looked alarmed when her phone started playing the music from her new podcast after she and co-host Dan Walker concluded an interview with Justice Secretary David Gauke.

She said: “Goodness me, sorry. God, that is so embarrassing. How have I done that?”

Walking out of the camera shot with her phone in her hand, she said: “I’m literally going to have to walk off set.”

Dan told viewers: “She’s walking off, she’s embarrassed”, before the programme cut to a live shot in Glasgow.

He could also be heard saying: “That’s Louise’s new podcast, The TriPod.”

Louise, who is a keen triathlete, launched the new show on BBC Radio Manchester on Monday night.

The pair burst into giggles as Walker said: “It’s still going, have we managed to turn it off?”

She covered her mouth with her hand as she said: “How have I done that? I genuinely don’t know what I did. I apologise profusely.”

After a short segment about the Clyde Bridge in Glasgow, Walker said: “Back in the studio, Louise is still a little bit embarrassed by the fact she sat on her phone and played her own programme.”

Louise later tweeted: “Oh my gosh! My phone is out of control. #apologies I think a banning order might be in order.”

When one viewer asked her if it was a “shameless plug”, she joked: “I couldn’t have timed it better if I had actually tried to.”

Louise added that her phone now has a “life-time ban”.

Has your phone ever gone off somewhere entirely inappropriate? Leave us a comment on our Facebook page @EntertainmentDailyFix and let us know your story.