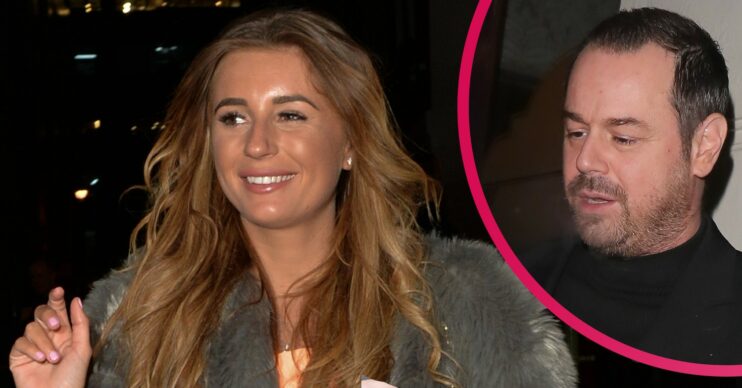 The family jetted off after Dani's boyfriend was jailed for fraud

Dani Dyer has pit her troubles with boyfriend Sammy Kimmence behind her as shared a series of new holiday pictures – including a topless shot of her EastEnders star dad Danny.

Danny, who plays Mick Carter in EastEnders, is smiling as his grandchild nestles into his shoulder.

Both he and six-month-old Santiago are wearing swimming shorts in the adorable photograph.

Dani has shared the picture on Instagram, along with several others from her family holiday.

Commenting, one fan said: “Gorgeous family ❤️ and the picture of grandad and grandson is so cute.”

Another said: “Omg the cutest.”

A third gushed: “These are so lovely.”

Another added: “Just look at Santiago with your dad 😍😍 They’ve obviously got such a lovely bond.”

“Gorgeous family ❤️ and the picture of granda and grandson 😍 so cute,” said another.

Dani’s “holiday photo dump” also features a picture of herself with her dad and her younger sister Sunnie, 14.

And fans cannot believe how alike the girls look.

Amazed, a follower remarked: “Omg your sister is your twin!”

Dani’s family holiday couldn’t have come at a better time.

Last month, her boyfriend – and Santiago’s father – was jailed for three-and-a-half years.

Sammy Kimmence was put behind bars after pleading guilty to defrauding two pensioners out of almost £34,000.

He claimed he would invest the cash through his company S&S Trading Ltd but failed to do so.

Kimmence was said to have cried as he was sent down.

Sources close to Dani have said she was “floored”, claiming Kimmence had “downplayed” the fraud.

An insider told the Daily Mail: “She is absolutely floored by what’s happened with Sammy.

“She knows she has to make massive changes in her life and she’s so distraught.

The insider claimed that Dani has ended her relationship with Kimmence.

Just a fortnight before he was jailed, the star had spoken about having another baby with him.

In a video of her YouTube channel, Dani said: “I’ll probably wait until Santi is two.”